when we listen to TLS’s works on LEEP [“p color” (w lezet), “mass creation machine” (feat k-the-i???), “acidoulus pink and grils from uranus”, “phonographie” (w mark rira)] we were fascinated with the incredible approach to rythm and how easily avant-garde approaches were mixed with pop and rock, hip-hop and everything else that someone might think that is almost impossible to mix. “my favourite color” summerizes all these in 10 tracks that run almost for 30 minutes ranging from abstraction to rock and from new wave to musique concrete. a taboo-less classic. 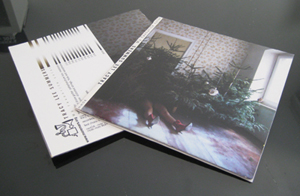 wonderful wooden reasons It has to be said that the opening drum line is an inauspicious start to what quickly opens up to reveal an intriguing album. Mixing industrial style rhythms with a decidedly krautrock sensibility and an abundance of noisy drones Summers has created something decidedly different here and I like it very much indeed. The music is free of any genre constraints (the ones listed above are just fleeting impressions) and it dances it's way through a bewildering array of sudden turns and jarring juxtapositions whilst retaining a deep sense of musicality and avoiding any self-indulgent navel-gazing. It doesn't all work, track 9 (Mythe) is a slightly pedestrian rock(ish) workout that could probably have been left off the album but this is a small flaw on a large tapestry. I adore music that confuses me and is impossible to second guess and that is exactly what we have here. Vital Weekly 629 Tracy Lee Summers, rather a band than one person me thinks, whose songs are short, around two and half minute, and is recorded with a curious bunch of 'prepared drone guitar, pataphysidrum box, melotron, larsenphone, distorted strings, flute and saxophone'. With some of these I have an idea what they look like. Their music is scattered all over the place. All instrumental, but sometimes moody and textured and at other occasions uptempo with a supportive rhythm box. The variations make this quite a nice release, but the recording quality however is not the best around.