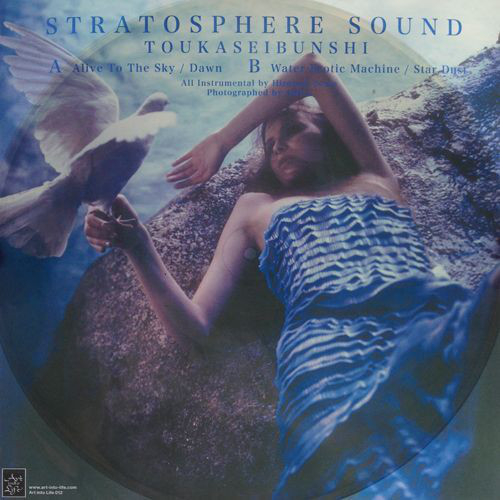 Hironari Iwata began his solo project Toukaseibunshi (Transparent Molecules) in 1985. In the same year he formed a second unit called Haiginsha, and began collaborating with Merzbow and Agencement. Iwata also ran the independent label Angakok, releasing several albums on cassette and curating a compilation that featured some the most radical musicians of the period including H.N.A.S., Asmus Tietchens, P16.D4, DDAA, etc. But in 1988 he suddenly ceased all musical activities. He returned to public attention twenty-one years later in 2009, when PSF Records released an edited reissue of his early album, “Meta-Inorganicmatter Meta-Newlon”. “Stratosphere Sound” is Iwata’s latest work, underpinned by his feelings of poignancy and deep passion towards his own music.

Toukaseibunshi’s release is designed to emphasize the concept of transparency: it is pressed on clear vinyl and comes with a photographic print by Aqua (Iwata’s photography alias) on special transparent film. Limited edition of 200.