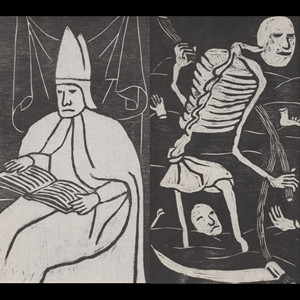 John Mylotte (aka Sir Ashleigh Grove) is the leader of the ultra-mysterious cult group Metgumbnerbone, which also includes Richard and Philip Rupenus of The New Blockaders.This is a heretical two-part work, entitled “Our Demons 1 & 2”, and was filmed on mini-DV cameras by Mylotte’s friends David Steans and Joseph Lewis. The films capture various ritualistic actions performed by ten masked individuals, somewhere in the blasted landscape of England. The films overflow with a warped humour, confusing the viewer as to the participants’ real intentions. The background music weaves an even more cultic atmosphere – not noise, but a kind of self-imagined trad folk. This version comes with an additional, stand-alone, remastered CD of the soundtrack. Only a small proportion of the soundtrack was used for the final cut of the film, so this is the only place where you can hear the full soundtrack. Highly recommended for all devotees of Metgumbnerbone’s uniquely eccentric sensibilities!