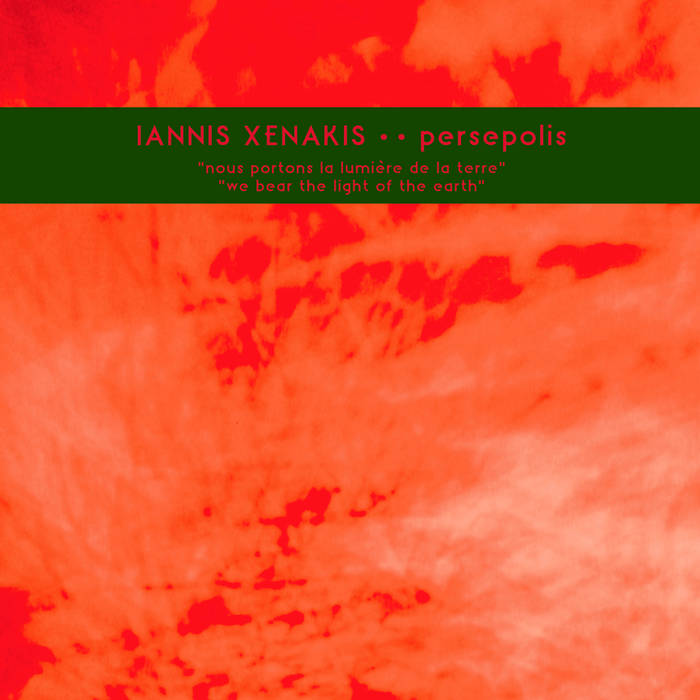 After “La Légende d’Eer” in 2016, the PERIHEL series presents one of the milestones of electroacoustic music: IANNIS XENAKIS’ mindblowing 54-minutes oeuvre “Persepolis”, mixed from the original 8 track tapes by MARTIN WURMNEST and mastered / cut by RASHAD BECKER.

“Persepolis” is the longest electroacoustic composition by IANNIS XENAKIS (1922-2001) who ranks among the most influential 20th century avantgarde composers. Commissioned by the Persian Shah, the piece was part of a multimedia performance – XENAKIS’ so-called “polytopes” – which premiered in 1971 in Shiraz-Persepolis (Iran) as a performance including light-tracks, laser beams, groups of children walking around with torches and 59 loudspeakers to project the music in an open-air situation. XENAKIS had realized “Persepolis” on 8-track analogue tape in the Studio Acusti in Paris and released a stereo reduction on vinyl in the famous Philips series “Prospective 21e Siècle” in 1972, adding the new subtitle “We bear the light of the earth”, his most hymnal title ever.
Out of print for decades now, the LP became – especially the Japanese edition from 1974 – one of the most expensive collector’s item of electroacoustic music. There were some later CD versions with different durations – too long due to a wrong sample rate, others shortened by 3 minutes due to other reasons. The PERIHEL series now presents a new version: mixed from the original (!) master 8 track tapes by longtime zeitkratzer sound engineer MARTIN WURMNEST and mastered by RASHAD BECKER at D&M, Berlin – the same experts who had already taken care of the 2016 KARLRECORDS release of “La Légende d’Eer”, another milestone composition among the works of the Greek-French avant-garde composer.