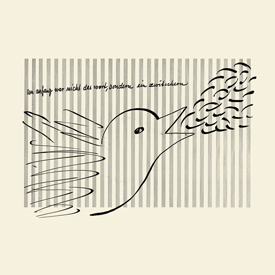 “I have worked together with sheep before” – says Henning Christiansen – introducing the performance he did in front of the Brucknerhaus in Linz in July 1988. But this time he went beyond, building a “Concert-Castle” with hay blocks where thirty sheep could perform music. Another time the animals – Christiansen’s obsession and passion – become the musical instruments used for his compositions: “Originally most of instrumental sounds derived from animal voices or other sounds of natural phenomena. The violins, for instance: someone found out that stretched intestines, dried bowels, could produce a sound. This has simply been civilized, refined”.

Schafe statt Geigen (Sheep Instead of Violins, 1988) and “Verena” Vogelzymphon (Bird Symphony, 1990) first appeared as a small CD edition issued by Galerie Bernd Klüser in 1991. Both works, each one occupying a full side of this LP edition, extend from one of Christiansen’s long standing conceptual strategies – deploying recordings of animals as stand-ins for musical instruments, sheep and birds respectively. While each work allows these source to take the natural lead, at times masquerading as field recordings, both feature subtle tonal and electronic interventions by the composer, creating strange and brilliant compositions which shift the terms and subjects of music as they were long understood. Accompanied by a twenty page booklet featuring drawings and texts by Henning Christiansen, as well as pictures of the performance by René Block.

“The background, the space where music happens is what I want to put into the foreground.”