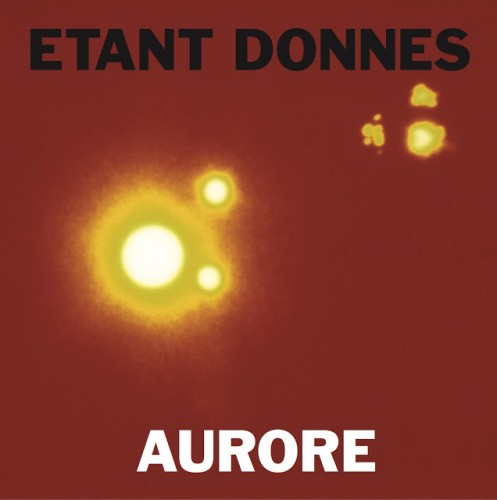 Penultimate Press presents the first release in a three-part series based around the four field-recording-based works made between 1990 and 1994 by the legendary French act Étant Donnés (brothers Eric and Marc Hurtado, born 1959 and 1962 respectively in Rabat, Morocco). Aurore opens the triptych and is made from ambient sounds collected like dew from nature. The gathered sounds were then used as a sound texture for the poems strewn among the field resulting in a single entity of arresting sound and text. Aurore is focused around an alchemical fire/water battle, this water which does not wet the hands. Aurore shares some convulsive movements that establish a link with Étant Donnés’s earlier works, for instance that exuding scream, worthy of the one Artaud uttered in his legendary 1947 radio program Pour en finir avec le jugement de Dieu. Eric and Marc Hurtado succeed in achieving what many sages consider to be the very purpose of magical art: to create one’s own ritual and, being one’s own referent, to become a vibrating point in the cosmos and be receptacle for natural energy, in the heat of the sun in an attempt to merge with the Whole. Aurore comes remastered and repackaged in a high-gloss sleeve with fully printed high-gloss inner sleeve, in a limited edition of 500 copies. It remains an extreme and beautiful sonic journey sitting outside of time.

Listening to Aurore, our two actors’ record, undoubtedly owing to the influence of the Mediterranean cradle, single umbilical cord of two great religions, the influence of both Latin and Arab worlds — Gaelic short and long sounds can sometimes be perceived — since their dictions are such a synthesis of several origins. Any true sound poetry is shattering, the really oral one is there in space, with the plus of the media machines, of the voices that slip through them, overwhelming them with the splendor of the bodies. – Henri Chopin