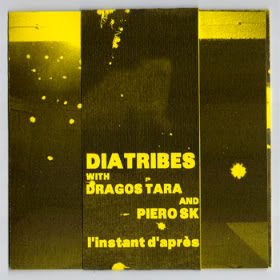 Diatribes, a strongly libertarian ensemeble, began its existence in a Geneva basement in Winter 2004. Their idea was to mix three distinct types of sound (electronic, wind and percussion), in order to develop a malleable musical mass. There are no limits to their sound, where rhythms, melodies and noise meet sporadically, merging into each other until they are almost forgotten. Free jazz in its approach, acoustic and electronic in its execution, the trio is capable of exploring the minute like the intense. Their relationship with the public is intimate and profound. Dreams and fears become noise and silence…

Piero SK is a personage born approximately 10 years ago, on a table of writing. He is an autodidact and work in theatre, writing and music. He collaborated in particular with Monsieur Jean, Noël Akchoté, Saadet Türköz, Jacques Demierre, Jacques Roman, Wilbert de Joode, Obaké, AbSTRAL compost, la Gale, Vernacular, Jeudi, Rue du Nord. Its biography is variable, its room is populated by shadows.

foxy digital
This Swiss outfit fuse laptop noise and found objects with free jazz percussion. Sounding somewhere between Jooklo and Usurper, they muster a noisescape of rambling extremities. On this CD-R double bassist, Dragos Tara and the incredible saxophonist, Piero SK, join them. The album was recorded in spring this year and captures a fresh landscape of discord and insanity. Throughout proceedings, the rambling is often pivoted with a stronghold forged by SK's devastatingly corrupt and direct soprano sax. The improvised element gives an intimate and live feel, to the home-listening experience. The electricity thrust upon the eardrum tingles the dormant into motion.
‘La démocratie reste un système bourgeois' is the most profound piece on this record. Showcasing the musicians through unity and full-frontal solos; this is 13minutes of improvised jazz at its best. Creaking soprano sax and electronics collide over a rolling tide of percussion. After 5minutes all artists excel into a ferocious battle finally giving way to a laptop and drum tempest. To mark a departure into reflective fields, SK is given the stand in an inspired solo that trudges with the pace of the heavy breathed session of Anthony Braxton on his contra bass sax. A deep, pained melody is strutted over an ever-pounding 4/4 drum pattern. The stop start of SK's paying accompanied with touches of eastern European gypsy and Moorish patterns, which allude to visions of seedy bathhouses in Budapest. This is music that is as visual as it is aurally stimulating. Finally, as the other players enter the cacophony, a rich canvas of twisting sounds fornicate in hell - a hell from the mind of Bosch.
The session veers through an hour of movements steeped in freedom and experiment. The central highlight piece elevates the album to something extremely memorable. Other memorable moments allow Tara truly shine, as on ‘Montèe aux enfres': a nightmare of epileptic ferocity. Things ramble to a close with a psyched out jamming, more akin to LSD March or Bardo Pond, than the previous raucous experiments that echoed Zappa at his most maniacal. Today, within Europe, free jazz and psych seems to be breaking free from the vacuous whirlpool of freefolk that has steadily built across the Atlantic. After a year of some significant releases in this revised genre, France, Scotland (inc. North England), Switzerland and Portugal are the places to watch right now. 7/10 [Peter Taylor]

vital weekly 681
On 'L'instant d'apres' something completely different is going on. It documents a fruitful collaboration of Diatribes, a promising outfit from Geneva, that has been reviewed earlier for Vital Weekly. Here they join forces with Dragos Tara, a rumanian artist living in Switzerland who studied at the conservatory of Geneva. He played in several rock, jazz, classical and what have you more combinations. Nowadays he is mainly active in projects of improvised music. The information concerning the other musician that takes part in this project, Piero SK, is a bit more mysterious and doubtful. From what I understand he is an autodidact working in the fields of theatre, writing and music. Tara plays doublebass and Piero SK soprano saxophone. They don't play together. In one track Tara participates, in the other Piero Sk, and so on. Making up a trio with Diatribes who are of Cyril Bondi (drums, percussion) and D'Incise (laptop, objects, live treatments). The cdr contains seven improvisations recorded in Geneva and Lausanne in 2008. The drumwork by Bondi is the dominating force in most of these improvisations. In the opening track "Entorse aus textures" his drumming is like a constant ever changing stream, putting different accents all the time. The bass by Tara moves in many different corners and edges. A very engaging improvisation, with laptop input by D'Incise that is not to be underestimated. The second track "Le givre" is a more open and closer to silence, with long notes played by the saxplayer. All improvisations are full of tension and delicate. There is nicely intertwined communication playing by drums, sounds and bass and sax. High quality improvisations. [DM]