The attitude in these tracks is punkish (in its very political sense) but they also add bits of kraut rock loads of no-wave, noise and improvisation. In their own words “this band is a lapse between relationships, a chance to do something different, to make brain-melting pagan rock’n’roll to be exact, to join the halves and make a whole, to be interesting just this once…”, “ENCOURAGE GIRLS STAGEDIVING, FUCK PATRIARCHY”. 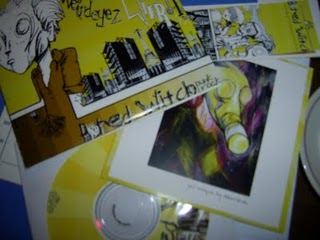 aboxfullofletters.wordpress
Dear John,
It’s a Thursday night, and you’re walking to the convenience store. Three blocks away from your carton of eggs and milk, along a city street normally crowded with traffic there is an alley you’ve never noticed before. You turn.
There is a set of stairs between brick walls of buildings that seem too long. It is littered. Newspapers, cigarette butts, neon band fliers, and a puddle that might be urine. Maybe it’s beer. Ten steps down and four paces to the door, you are met by a bouncer, a bouncer and an odor. They are old friends. The bouncer points to the sign on the door. “$5.” After your fiver disappears into the sweaty paw, you walk through the threshold.
Funny, you couldn’t hear it outside. It’s loud. Very loud. The odor is stronger, thicker. You can see it, but not much through it. It moves with the force of the bass, distorted with a hint of chorus. It swells with the kick, and slides back with the snare. Backbeat.
You can make out the figures of people amidst the smog. Punks. Punks in gas masks. Punks in black, in tight jeans and high-tops, colored hair, black hair, white faces. Very white faces thin with huge eyes and tiny lips. They are wiry, and they are dancing. You can’t see the band. The smog is industrial.
You close your eyes. At times the vocals sound like Mark Sandman, at times like the frontman love-child of Jim Morrison and Lou Reed and Kurt Cobain. There’s a little Hot Water Music, a little Cult, a little Goth, and a great deal of noise. High-end feedback, pick noise, guitars that move in waves around tonality and remind you a little of 801 on steroids and blow, but only distantly.
You receive an elbow to your spine, and your eyes open. The train is derailed, and you realize that the music is aggressive more than it is relative. It is post-apocalyptic and actively brooding, lo-fi and fresh from the garage. It’s The Troggs as imagined by Krist Novaselic or Matt Skiba.
You move among the crowd, and at the end of the five-song set you are jarred. The smog is clearing, and the band is taking equipment from the stage, packing the drums into cases, the pedals into boxes. They are drinking from plastic cups, they are smoking. The walls are fading, and you are unsettled.
After the equipment has been cleared you notice a low buzz. Additive voices and clanging metal like an amp dropped, but lower, wider. The stage slides back into the ground, and your ears are ringing. You head for the door, between the punks, unmoving, between the uncertain walls.
You are out, and the door guy is nowhere to be seen. You climb the stairs, and the alley is empty. Turning around, the stairs are gone. They have moved, and you think of all the alleys you’ve never seen. But they’re there, and you wonder, "Who were those guys?"
They were Bored Witch, and the name of the EP is "Weird Eyes Weird Is."
Best,
Jack Straw

frequenciesagainstroutine.blogspot
one of the best bands out there.A mix of punk rock,new wave,noise.This is a self-released ep however it is distributed by more mars team,so contact the label to find out if there's any copy left
A MUST [DL]