Pentiments is proud to present a new release-experiment in the form of an analog/digital hybrid sound mobile by the Swiss sound architect Andres Bosshard. Bosshard has been working since the early 80’s as an exhibiting and performing artist, architectural designer, teacher and writer, earning several awards and accolades for his body of work along the way. His new release Piano Streaming: Flügel im Sinkflug über Grüneck, A Self-Organizing Choreophonic Constellation for Flying Sounds is his first foray into the realm of physical music releases in about three decades, with the most readily available precedent to the project being his 1987 tripartite cassette mobile Nachtprisma Hexaphonisches Sonarium – Soundscapes Für Stereoanlage Ghettoblaster Und Walkman.

Piano Streaming takes as its sonic and conceptual base an LP presenting a 41 minute long soundwalk through and around a 1924 Steinway grand piano, exploring the resonances, materials, potentials and dynamics of the instrument in manners both subtle and raucous (with the particular help of a few errant tennis balls). The periphery and superstructure of this “sonic garden” takes the form of 256 ancillary satellite recordings in figurative gravitation around this base—recordings provided on a USB business card are included for simultaneous playback in the vicinity of the LP in modes and variations left to the listener. While one is free to take the release on the terms of a traditionally discrete electroacoustic composition on disc, Andres’ conception asks instead that the LP become only an interface for wider collisions outside of musical time, the “streaming” indicated by the title more fittingly interpreted as describing a “liquid archive” comprised of a living spatiotemporal dispersion of the sonic bits and pieces of this piano and its environment. “Use a pair of headphones or a mobile Bluetooth speaker, carry it around, keep it mobile. Feel free to alter the amount of satellites, each playing its own sound library in shuffle/repeat. Explore your space, go back and forth, open and close sometimes windows and doors.”

However you choose to engage Andres’ invitation, the skillful sensitivity through which the work has been crafted is undeniable–the “visionary” descriptor afforded him by Schweizer Musikpreis in 2017 seems to us not unfounded. Edition of 160 with full color jackets & USB business cards, cover art by provided by Abraham Guggenheim & the Swiss Guggenheim Foundation, mastered by Giuseppe Ielasi. 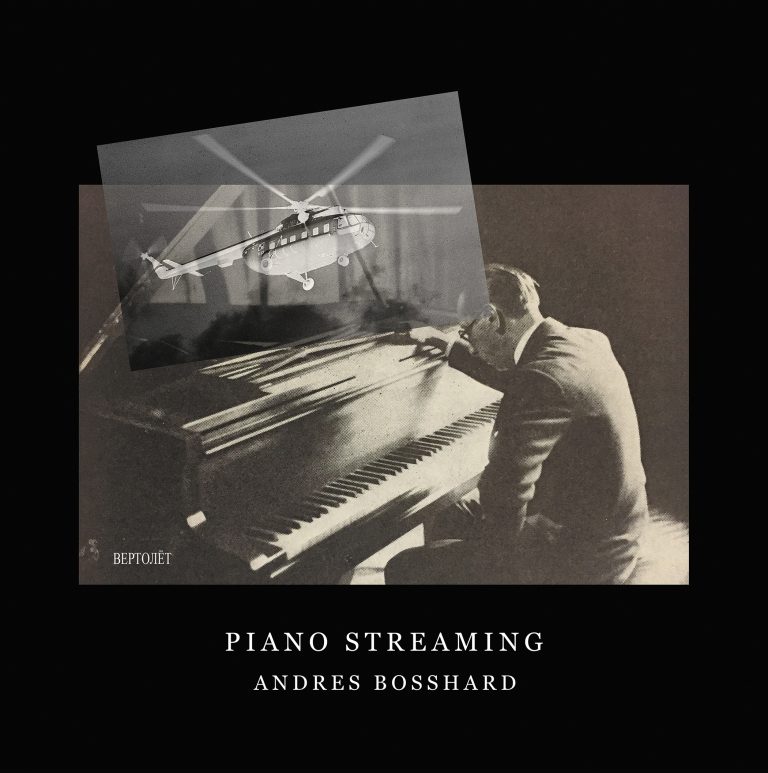