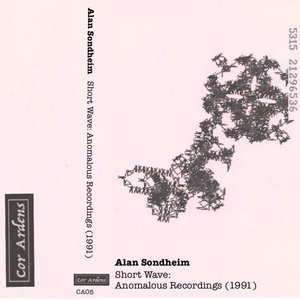 Alan Sondheim is an American poet, critic, musician, artist, and theorist of cyberspace. He was born in Wilkes-Barre, Pennsylvania. As a musician Alan is a jazz composer, guitar virtuoso and a charming improviser. His two first albums, it was published in 1967-68, on ESP Disk catalogue, next to names like Albert Ayler Trio, Ornette Coleman etc. These two works still until now two great masterpieces of the Experimental / Free Improvised jazz scene of that time, that was performed by his Ritual All 770 ensemble. After these recordings, Alan stayed silent until 2005, starting to release solo and collaborative works.

Short Wave: Anomalous Recordings is Alan’s longtime study of Anomalous Shortwave Radio signals, a pleasant surprise, including a much more experimental point of you of his work, originally transferred from original cassette home recordings made during the year 1991. Sondheim’s accompanying 1983 essay “Another Mother of Us All (A phenomenology of short wave” describes Short-Wave as an ‘interactive medium’ in which ‘The Listener moves across the globe, through vagaries of weather and international politics, to envelop herself’ an experience at once embodied and orgiastic. This collection invites the listener into a multiplicity of interpretations, giving no immediate roadmap, we may become first enveloped in curiosity. Patterns emerge from static like fields of ribbon- arousing in the listener a Rorschach of associations from the lonely calls of aquatic life to the solar wind bouncing off Jupiters Magnetic Field. We listen and find ourselves presented with an innumerable series of possible pathways “Falling through another world. Falling through all possible worlds simultaneously”

The Release features a Full Color- Six Panel J-Card Insert with original works derived from a Qbasic multivariable fractal program designed by the artist roughly at the same time as the recordings.